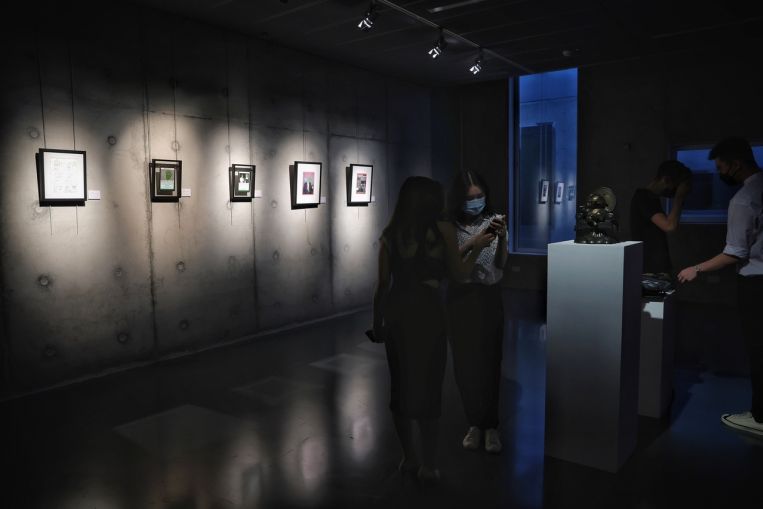 SINGAPORE – A week-long NFT exhibition, the largest of its kind in Singapore, kicked off at Le Freeport on Sunday (Nov 7) with nearly 30 artworks from artists such as Beeple, Andy Warhol and others in the digital and crypto art world.

Right Click + Save is presented by Coinhako, a digital assets wallet service provider, and Appetite, a multi-concept space and research centre. It runs till Nov 14 and will present the exhibits in a motley of formats – via screens, monitors, projections and as framed prints. The works, on loan from collectors and artists,are spread across four rooms at Fine Art Storage Services, a tenant of the high-security storage and display facility near Changi Airport.

The show dives into the history of crypto art and comes in a year where non-fungible tokens (NFTs) have been dominating the headlines and spurring more local artists and businesses to hop on the bandwagon.In March, a digital collage by American artist Beeple sold for a record US$69 million (S$93 million) at a Christie’s auction.

NFTs, which serve as digital certificates of authenticity, are unique tokens that can be linked to objects such as digital art, music and even tweets. They are proof of ownership, and the information is stored on a digital ledger known as the blockchain.

The Right Click + Save show dives into the history of crypto art.

Some of the highlights are Sarah Meyohas’ Bitchcoin (2015), which preceded the launch of the Ethereum blockchain platform; Warhol’s Untitled (Flower) (circa 1985; minted 2021); and Refik Anadol’s immersive data visualisation.

Appetite art lead Clara Che Wei Peh, the show’s curator and the founder of the online community NFT Asia, says that before this exhibition, there was no large-scale attempt in Singapore to consider the diversity of art styles and different kinds of mediums that could be minted as NFT artworks.

“We are inviting people to think further about what ownership, provenance and these different themes that surround NFTs could actually look like.”

Only one of the works is for sale. A “Doge To The Moon” figurine and NFT presented in partnership with local collectibles company Mighty Jaxx is up for auction from Thursday, with a starting bid price of a million dogecoins (about US$260,000).

The organisers hope the show will raise awareness of NFTs and crypto art.

“There’s a lot of jargon, a lot of technology and there are lots of barriers to entry for someone who might be intimidated by these things,” says Appetite’s general manager and head of research Kaushik Swaminathan.

“If they have the experience of coming to an exhibition, seeing the works physically, learning about some of the pioneers or most influential artists in this space, and also realise that these don’t just exist in the realm of galleries and museums, but that people in Singapore have bought these works as part of their own collections, then perhaps we are going to be able to bring new people into the crypto world.”

Right Click + Save, which allows viewing by appointment only, was fully booked before the exhibition began.

The public can still tune in to several online panel discussions on Twitter Spaces, and view a parallel exhibition on the virtual collaboration platform Spatial from Sunday (Nov 7) to Dec 7.

Singapore-headquartered Coinhako, which was founded in 2014, this year (2021) saw a five to 10 times growth in terms of total volume of cryptocurrency traded, says its co-founder and chief executive Yusho Liu. They have more than 300,000 users in Singapore.

He adds: “As a company, we have not dabbled in the NFT space yet, but this is one way for us to get involved in the community. After this event, I think we’ll have a better sense.”

NFTs have various advantages, such as helping to verify provenance, and potentially allowing artists to get resale royalties. Detractors point to the environmental cost of mining cryptocurrency, and have also raised the concern that the NFT mania might be a bubble waiting to burst.

Ms Peh hopes the NFT exhibition at Le Freeport will broaden people’s ideas of what constitutes serious and important culture.

“A lot of the works we have in this exhibition are rooted in creative coding, generative art, or AI (artificial intelligence) data visualisation. These are things that are also happening in contemporary art, but it’s just so new that people are still very much learning to do it.”

She adds: “In the past year alone, I’ve seen a lot of artists, gallerists and curators who are becoming more interested in digital and new media art because of NFTs – and vice versa, from the crypto communities.

“So it’s this coming together of two unexpected ecosystems and feeding off each other’s synergies, thinking about what this can mean for changing visual cultures moving forward – that’s really exciting.”