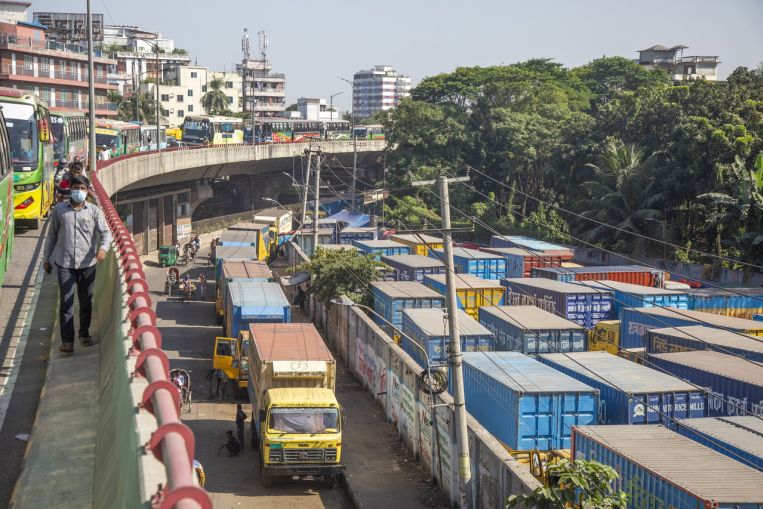 The latest protest is taking place in Bangladesh, where truck owners and staff have stopped work since Friday (Nov 5), vowing to continue until the government reverses its decision to raise diesel prices by 23 per cent, according to the country’s Truck, Covered Van and Lorry Owners and Workers’ Coordinating Council.

Earlier this month, truckers in Indonesia’s South Kalimantan met the local government during a one-day stoppage to complain about diesel shortages and smuggling at fuel stations, while in Thailand tens of thousands of drivers have been on strike since last week and are demanding a cap on diesel prices.

There’s a prospect the disruptions could add to the snarls in global shipping and logistics that’ve clogged ports and delayed deliveries of finished goods and raw materials. In Indonesia, the trucker protest risks a shipping backlog at the port of Trisakti, according to security firm GardaWorld.

Protests are intensifying as a diesel shortage in Asia worsens, putting pressure on prices in the region that have already risen 64 per cent this year and last month surged to the highest since 2018, according to Bloomberg Fair Value data. Refining powerhouse China, which has traditionally exported the fuel, has slowed sales to help ease its energy crunch, while the Philippines has lifted imports after the shuttering of refinery capacity.

“Diesel prices have skyrocketed this year, and countries like Indonesia and Bangladesh that typically import diesel are reeling from the financial costs of subsidising the fuel while import costs have been rising, which is unsustainable,” said David Wech, chief economist at energy shipping-analysis firm Vortexa.

More protests are possible in the region, if governments don’t act adequately to protect consumers, said Peter Lee, a senior energy analyst at Fitch Solutions. Yet, government budgets are already under pressure from the surging costs of energy imports and the rising prices of everything from food to coal.

While the truckers face higher costs, it’s not feasible for authorities to “maintain previous high level of subsidies for diesel, when global prices are rising and state revenues from multiple sources have been hit by the prolonged pandemic,” Mr Lee said.