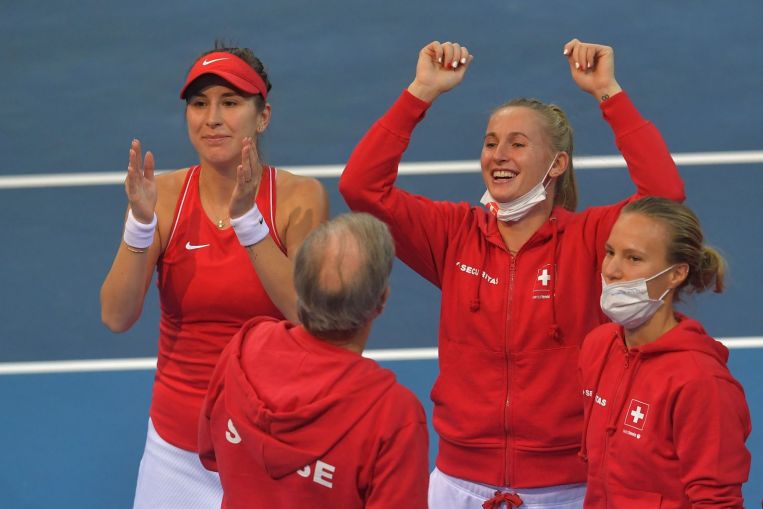 Switzerland reached the final for the first time since 1998 after Jil Teichmann romped to a 6-0 6-3 victory over Storm Sanders before Bencic handed the Swiss an unbeatable 2-0 lead by dispatching Tomljanovic in front of American great Billie Jean King, who watched on from the stands.

There was joyous scenes in the Russian camp too when Liudmila Samsonova teamed up with Veronika Kudermetova in the deciding doubles to help Russia beat the United States in the other semi-final.

Bencic will be counted on to lead Switzerland’s charge against favourites Russia.

“It is quite incredible,” Bencic said on reaching the final.

“I don’t think we really expected it. We had the toughest group.

“We are so happy to be in the final. We cannot believe it yet.”

Under the tournament’s new format, 12 teams were split into four groups of round-robin play and the group winners progressed to battle for the title.

Switzerland, looking to raise the trophy for the first time, opted for world number 39 Teichmann to open their tie after her solid doubles display during the week.

Teichmann breezed through the first set against Sanders, ranked 92 spots below her, before the Australian put up a challenge. But the left-handed Swiss regained control and smashed her seventh ace to secure the win.

“My team told me just go out and fight with everything you have,” she said. “I felt really good. I went for my shots, I played aggressive.”

In the earlier semi-final, Russia’s Samsonova and Kudermetova defeated the American pair of Shelby Rogers and CoCo Vandeweghe 6-3 6-3 in the decisive match.

Russia, bidding to win what was formerly-known as the Fed Cup for the fifth time, are competing in Prague as the Russian Tennis Federation team due to sanctions that prevent them using their country’s flag and anthem due to doping scandals.

Danielle Collins had earlier levelled the tie for 18-times winners United States with a 6-7(9) 7-6(2) 6-2 win over Anastasia Pavlyuchenkova after world number 40 Samsonova, making her Billie Jean King Cup singles debut, had given the Russians the lead with a 1-6 6-4 6-3 victory over Sloane Stephens.

“I was very positive before the match. I knew it’s gonna be a very, very tough match against Sloane,” she said, and later added after the tie that she would feel confident teaming again with Kudermetova if Saturday’s final went to deciding doubles play.