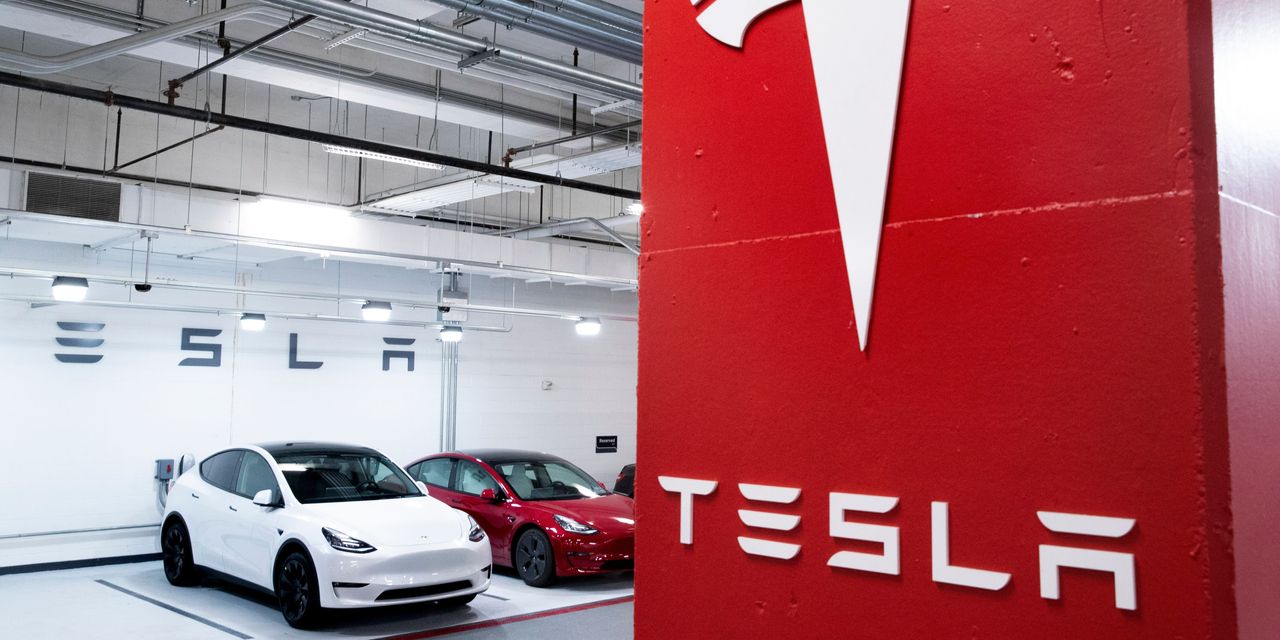 has won over equity investors, but it still has work to do to convince ratings firms.

The electric-car maker on Monday joined a small club of companies valued above $1 trillion. It’s the only manufacturing company in the group, alongside technology firms

Stock-market investors’ strong confidence in the company is in stark contrast to the junk ratings on Tesla’s debt from S&P Global Ratings and Moody’s Investors Service. Tesla’s trillion-dollar peers all have triple-A ratings, according to data provider FactSet.

The Morning Ledger provides daily news and insights on corporate finance from the CFO Journal team.

S&P has increased Tesla’s credit rating by five notches over the past year and a half, to BB-plus on Friday, which is one level below investment grade, though with a positive outlook. Moody’s upgraded Tesla’s rating to Ba3 in March, a category that describes debt that is somewhat speculative in nature and has some exposure to risk.

Tesla’s high stock price—its shares were at $1,069.27 in early afternoon trading Thursday, up 3% from Wednesday’s close—enables the company to sell equity, as it did in December 2020, when it sold $5 billion of its common stock, or offer new convertible notes, analysts and investors said. Tesla’s stock started trading at $17 when the company went public in 2010.

“I expect they would get better pricing if they were to offer debt to the market,” said Eli Pars, co-chief investment officer and head of alternative strategies at Calamos Investments LLC, an investment firm that has bought some of Tesla’s convertible debt. Mr. Pars lauded the company’s balance sheet, adding that Tesla has turned the corner on improving its operations and scaled up production.

“The equity market might be quicker in rerating the stock [than the ratings firms],” said Seth Goldstein, a senior equity analyst at Morningstar Inc., adding that he expects the ratings to eventually catch up with the company’s share performance.

Moody’s and S&P said that market valuation isn’t a factor that contributes directly to a company’s rating. While the company currently has the financial profile of an investment-grade company, it faces several business risks, said Nishit Madlani, a senior director at S&P Global Ratings. Among those are competition from other electric-car makers, whether it can meet demand for its products as well as its exposure to future downturns as it produces more cars at an affordable price point, Mr. Madlani said.

S&P will track Tesla’s sales volumes, its margins and its ratio of free cash flow to sales to establish whether the company will achieve an investment-grade rating, Mr. Madlani said. “Right now, the story here is that this is a company that’s done extremely well by minimizing its financial risk,” he said.

Tesla in its most recent quarter spent $1.5 billion on lease repayments and to pay down debt, leaving it with cash and cash equivalents of $16.1 billion, up 11% from the prior-year period. The company continues to retire high-interest-rate debt, Chief Financial Officer

said during a recent earnings call. Most of the company’s obligations consist of convertible bonds that can transform into shares over time, instead of conventional bonds for which it would have to pay a coupon.

Tesla, after years of burning cash, is now boosting its revenue and profit. The car maker earlier this month reported a $1.6 billion third-quarter profit, up from $331 million a year earlier, on revenue of $13.8 billion, beating Wall Street expectations.

Tesla said it produced approximately 238,000 vehicles during the third quarter, up over 70% compared to the prior-year period and putting it on track to hand over nearly 900,000 cars to customers in 2021. The company has set ambitious targets, stating it aims to increase deliveries by more than 50% over last year’s total of nearly half a million vehicles. It is working to open new plants near Austin, Texas, and Brandenburg, Germany.

The company is spending heavily on rolling out its manufacturing footprint as well as charging and service capacities, and is expected to allocate about $6 billion toward capital expenditures this year, according to a forecast by Jefferies Group, an investment bank. “Tesla has a high valuation, but behind the valuation, there is a business that is both growing and generating profits and cash well above industry norms,” said Philippe Houchois, a managing director at Jefferies.

Its capital needs will likely remain high over the coming years, but with profits growing, a substantial portion of that will be generated by the business itself, said Mr. Pars of Calamos Investments. “They are arguably close to self-funding,” he said. Tesla’s management has stated it wants the business to be debt free and maintain a strong balance sheet.

The company could request a rerating from the ratings firms, said

global head of credit and fixed income at asset manager PineBridge Investments, which has bought Tesla’s debt as well as equity in recent years.

Tesla didn’t immediately respond to a request for comment.