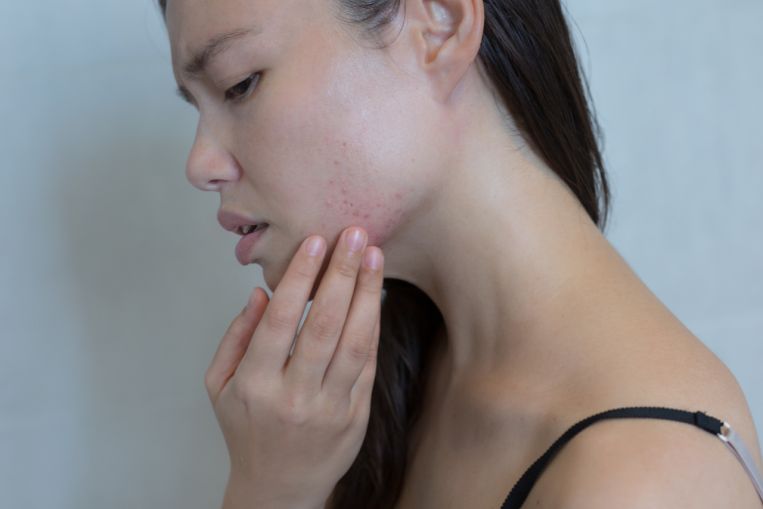 NEW YORK (NYTIMES) – No matter how much we claim to value people’s inner worth over their outward appearance, what we see upon meeting someone for the first time can colour our assessment of the person’s value.

At least, that is what many adults with acne fear, prompting them to shun social or professional encounters lest their facial blemishes result in a bad impression or even rejection.

Acne is usually considered an adolescent problem that should diminish by the college years and become history when it is time to find a job.

Even among those 50 and older, 15 per cent of women and 7 per cent of men said they still struggled with these blemishes.

And experts say acne has become an increasingly prevalent problem among adult women in recent years.

In some cases, problems with acne that began in adolescence persisted well past their teen years, but others developed acne for the first time as adults.

“Because fewer of their peers have it, adult acne is more socially isolating than teenage acne, and it can have a tremendous impact on a person’s life,” said Dr John Barbieri, an acne specialist at Brigham and Women’s Hospital in Boston.

Ms Natalie Kretzing, a 27-year-old medical student in Philadelphia, had only moderate acne in her teens that became severe cystic acne around age 22.

“I wanted to be respected as a young professional, but my acne made me feel like I was not an adult,” she said. “I had to spend so much time on my appearance and make-up that it was exhausting, and I often ended up cancelling plans. I couldn’t be spontaneous because it would take me so long to get ready.”

Modern diets may play a role

Though it may seem to be a superficial skin problem, acne is really a complex disorder that results from an interaction between various components of the skin and people’s hormones.

Acne lesions result when hair follicles in the skin become plugged with oil and dead skin cells that together provide fodder for bacteria. An imbalance of hormones and emotional stress can make the problem worse.

Diet has long been blamed and there is now growing evidence that modern diets may indeed influence the incidence and severity of acne, Dr Barbieri reported last year.

While some people react adversely to a particular food, more generally, there is often an association with milk consumption and foods rich in added sugars and refined starches. These foods increase insulin and insulin-like growth factor, hormones that can foster acne development.

In a study of 50 adult women with moderate to severe acne recently published in medical journal Jama Dermatology, Dr Barbieri and his colleagues revealed the toll the condition can take on mental and emotional well-being. The women often experienced problems with depression, anxiety and social isolation.

Like Ms Kretzing, they felt less confident at work and when dating, and often took obsessive measures to hide their acne from others. British dermatologists similarly noted that many of their adult patients who had visible acne summed up their feelings as: “Nobody likes damaged goods.”

Yet, the lesions need not be extensive or especially severe for acne to be bothersome to those who have it.

“The problem is defined by the patient. Someone with just two or three pimples can be very distraught,” said Dr Emmy Graber, president of the Dermatology Institute of Boston. “If people are bothered enough to seek my care, their acne is serious enough to be treated. They may be embarrassed at work or when meeting new clients. Even on Zoom calls, they may try to position the camera so that their acne is less obvious.”

A range of treatments

Most people with acne try treating it first with over-the-counter products, like topical retinoids, which can be very helpful for those with mild and sporadic outbreaks. Topical retinoids can make the skin more prone to sunburn, so those who use them should be careful in the sun.

More severe cases of acne may require a combination of over-the-counter products and a prescription oral treatment, like Accutane (isotretinoin), a derivative of vitamin A that reduces the amount of oils released by glands in the skin. Because retinoids can cause severe birth defects, women who use Accutane must participate in a programme to guarantee that they do not become pregnant.

Doctors have also long prescribed oral antibiotics, which may have to be taken for years to keep acne under control, but that regimen risks contributing to the rise of drug-resistant bacteria.

More recently, for women with hormone-related acne, long-term antibiotics have been replaced by spironolactone, a prescription oral blood pressure medication. This drug has proved highly effective for women like Ms Kretzing, who no longer worries about how people perceive her.

“It’s made a huge difference in my attitude,” she said. “I’m more carefree, spontaneous and confident.”

In fact, the now-successful treatment for her acne inspired her to go to medical school and, she hopes, to eventually help patients like herself get the right treatment for their acne as quickly as possible. Delayed resolution of cystic acne like she has had can result in permanent scarring.

Whatever the treatment used, patience is required. It can take six to eight weeks to see the desired results.

Diet: Limit consumption of sweets, refined starches and fast foods, and rely primarily on a nutrient-rich diet with lots of vegetables and fruit. If you suspect you break out after eating a particular food, eliminate it for several weeks to see if that helps.

Minimise stress: It does not cause acne, but can make it worse. Lowering your stress with calming activities such as yoga, taiji, meditation and relaxing hobbies might help.

Try cover-ups: Outbreaks can often be made less obvious by using water-based make-up and tinted moisturisers and sunscreens. Choose products that are labelled non-comedogenic, meaning they will not clog your pores. Men with acne can often hide blemishes under facial hair.

Boost your spirits: Know that you are not alone. Many adults have acne. Build resilience by reminding yourself that you are much more than an outer shell. Try to present a positive outlook to the world.

Get good professional help: If after several months, a doctor-recommended treatment has not helped significantly, consider seeing another professional.