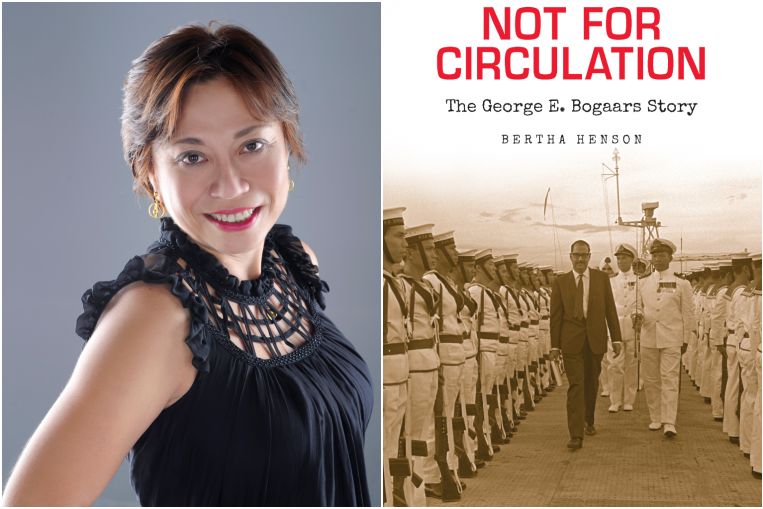 SINGAPORE – She has written a collection of political and social commentaries, and an analysis of last year’s general election.

But the biography of a civil servant who died nearly 30 years ago, and whose work remains obscure even to younger civil servants?

Why would Bertha Henson – former journalist and now adjunct professor at the National University of Singapore – want to chronicle the life and times of George E. Bogaars?

Over coffee, she says former top civil servant Herman Hochstadt approached her in December last year with the idea of a book to commemorate Mr Bogaars’ birth anniversary. He was not alone.

Mr Bogaars’ former Treasury colleagues coaxed Henson into having a Zoom call with them, where they simply assumed she would take on the project.

“I must say that the older civil servants don’t know how to take no for an answer,” she quips.

Mr Bogaars, their Greatest Ever Boss or GEB, as they fondly called him, died in 1992 at the age of 65. He was survived by his ex-wife Dorothy, who died in 2019, and three children Paulina, Christina and Michael.

Not For Circulation: The George E. Bogaars Story was published last month.

The Eurasian is a footnote in Singapore’s history books despite steering the nation through its tumultuous early years – heading the Special Branch during Operation Coldstore and Separation, setting up the Singapore Armed Forces and carrying out Budget reforms.

He joined the civil service in 1952 in the then Ministry of Trade and Commerce, and rose steadily up the ranks.

In 1961 – two years after the People’s Action Party (PAP) came to power – he was appointed director of the Special Branch under the Ministry of Home Affairs. Seven years later, he became head of the civil service.

Top posts at the ministries of finance and foreign affairs followed in quick succession in the 1970s.

One of his key innovations was making each ministry submit, together with its annual budget proposal, a review of its major achievements against previous targets, and relate its proposal to targets for the new financial year.

This riled some ministries which were not used to a performance-based budget process.

Little else is known about him. One reason was the confidential nature of his early work.

He also died early on – long before his contemporaries like Sim Kee Boon, who died in 2007 – and before a wave of local politicians’ biographies hit the stores in the late 1990s.

His peers are either dead or too old to recall the finer details, says Henson. “There were some embarrassing moments. I called a couple of numbers only to be told that they had passed away.”

Others point to the ill-starred acquisition of Straits Steamship in 1983 when he was Keppel chairman.

The $408 million takeover was the biggest in Singapore then, and took place just as the ship repair and property sectors nosedived.

As a result, Keppel paid a huge price – a debt of nearly $845 million and additional interest burdens each year. One bank was so spooked that it pulled its credit lines to the company.

Notwithstanding his professional controversies, the man was well-loved.

People wept openly when she interviewed them, says Henson, especially when they recalled his last years.

After suffering a heart attack in 1980 during his time in Keppel and three devastating strokes in 1984 and 1985 after he stepped down, the outspoken and jocular GEB faded from public view.

He spent his time in a ground-floor apartment surrounded by his beloved collection of old clocks, supported by a tiny pension and live-in helper.

“It’s sad because if he had stayed on a little past retirement age when civil service salaries were raised, he could have had a bit more put by,” says Henson.

Mr Bogaars was not part of a promotion exercise around that time, which moved up senior civil servants Sim, J.Y. Pillay and Ngiam Tong Dow.

In any case, the illness he succumbed to after Keppel made it impossible for him to have a lucrative second career in the private sector – a point which his younger daughter Christina makes in the book.

Like any good civil servant, Mr Bogaars did not comment publicly on his work. He kept no official documents.

This made it hard to fill the gaps, says Henson, who had just six months to piece together information from local and foreign archives and interview his family and acquaintances.

There was also the question of whether people’s memories were accurate. “Some conceded that they heard or knew about things second- or even third-hand. Other interviewees were more speculative, but wouldn’t go on record.”

What was helpful, she adds, was situating his career within the broader context of Singapore’s history. For example, while there is scant information on his work during Operation Coldstore, some facets of his professionalism can be gleaned from the Internal Security Council minutes following the dragnet, in which more than 100 people were rounded up on suspicion of being communist sympathisers out to subvert the state.

The minutes painted a picture of a man who had to carry out the vision of the elected government amid political, social and economic tumult, while simultaneously fending off British unhappiness about the outcome of the interrogations and the use of solitary confinement.

His responses, the book notes, “were clinical at times, even at a slight variance from the line taken by his political master, but there is no evidence of toadying”.

In an interview with The Straits Times in 1981 after he retired from the civil service, Mr Bogaars described politics as a “fairly unsavoury business”.

His working principle was that civil servants had to recognise the will of the people vested in an elected government, and policies had to change according to social and political conditions of the day.

Before the PAP government came into power, he had already served the British colonial government and the David Marshall and Lim Yew Hock governments, and experienced a multitude of demonstrations and riots involving pro-communists such as the Anti-National Service Riots, and the Hock Lee bus riots in the 1950s.

What really were the common objectives of the civil servants and politicians? For Mr Bogaars, it changed so many times.

First, it was to serve British interests. Locals were aliens in their own land.

Then, he had to dance between the changing local politicians who had some legislative control and the British overlords.

After that, civil servants had to think about Singapore as a state in Malaysia and the interests of the federal government.

It was only in 1965 that there was a united goal of serving the interests of the people of Singapore.

Unlike civil servants today, he was not dealing with a well-oiled bureaucratic machinery.

“We have to remember that the pioneer civil servants were of the same generation as the founding fathers. There might be respect, but less awe,” says Henson, adding that they could see the failings, faults and foibles of the politicians in their bid for political control.

“Now, you have politicians who know the machinery of bureaucracy inside out, set in a functioning prosperous economy and in a stable political order. I am sure the terms of engagement would be different.”

Mr Bogaars, while he discharged his duties faithfully, was not a man who hopped to attention when his political masters spoke.

He often lamented that being vocal was a disadvantage for a civil servant, though he never gave examples.

In 1974, he criticised the civil service, which he was head of, as being “terribly overstaffed”.

He also remained ambivalent till the end about civil servants who entered politics.

It was as if they had forsaken the “priesthood”, which was how he described the pinnacle Administrative Service.

But he had lived through the Japanese Occupation and the ensuing decades of upheaval. He was no political neophyte.

He knew, like any civil servant worth his salt, that what you want is not always what you get; that the individual will bend to the collective good. That there has to be public order first, so that economic and social development can follow.

On that point, concludes Henson, Mr Bogaars and the politicians were one.