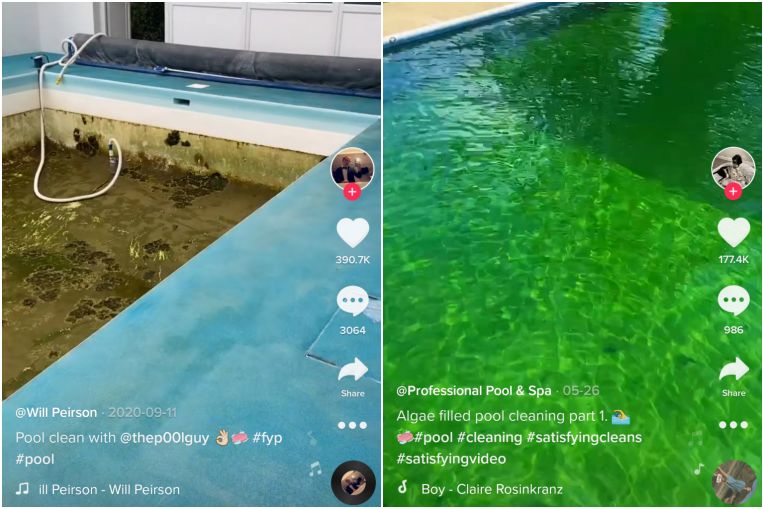 Better known by his moniker @thep00lguy, Mr Laflin, a swimming pool engineer from Britain, posts short videos to his channel which take viewers through the often-laborious process of cleaning his customers’ grime-covered swimming pools, with the most dramatic “green to clean” transformations gathering more than 100 million views.

Mr Laflin, who has been cleaning pools for more than 11 years, is one of the newest additions to a group of online creators clustered under the umbrella term “cleanfluencers” – cleaning influencers – whose clips of humdrum tasks, including blasting dirt from decades-old carpets and pressure-washing sidewalks, have found a surprisingly large audience.

Although there are undoubtedly viewers looking for practical cleaning tips, some researchers believe the root of such videos’ popularity lies deeper in human nature.

Dr Stephanie Alice Baker, a senior lecturer in sociology at City, University of London, said cleaning videos have a shock factor between the beginning and the end result, a well-established trick of the trade, that helps make them compelling.

“It’s long been known in the fitness industry that one of the most successful ways to build an audience is a before-and-after post.”

She added that a large part of the videos’ appeal is how they make viewers feel.

“Many people report a sense of satisfaction from watching a filthy pool be transformed into something beautiful and clean,” she said.

“These videos represent a sense of accomplishment, order and mastery, which can be both calming and engaging for viewers.”

The phenomenon of content that is oddly satisfying is by no means new. The subreddit “oddlysatisfying”, created eight years ago, has more than six million followers, and accounts on YouTube have built similarly large audiences.

Yet, TikTok’s emphasis on short-form videos that deliver a cleaning high in a matter of seconds has propelled the video genre to new levels.

Videos tagged with #oddlysatisfying on the platform have generated more than 49 billion views, beating recent TikTok trends such as #bamarush on sorority recruitment or #frozenhoney many times over.

Dr Craig Richard, a professor in biopharmaceutical sciences at Shenandoah University in Virginia, believes the appeal of cleaning videos lies in human evolution.

For our ancestors, watching a person work with her hands would most likely teach them a skill, he said. That lesson has filtered down through the generations so that even today, watching videos of people at work subconsciously flicks on that part of our brain, he added, and keeps us glued.

In this way, he added, the videos by Mr Laflin and other cleanfluencers are the modern-day equivalent of watching painter Bob Ross on long-running PBS series The Joy Of Painting (1983 to 1994) – people instinctively get drawn in, even if they have no intention of painting or cleaning a pool.

The expert action and gentle sounds of pool-cleaning videos are also similar to those in videos that produce an autonomous sensory meridian response, commonly known as ASMR, said Dr Richard, who has a website devoted to the topic.

ASMR describes the pleasurable, brain-tingling feeling that some people have when experiencing certain activities, such as hearing someone whisper or crinkle up paper or plastic packaging.

As for why some people find pool videos satisfying, Dr Richard cited a 2018 study he worked on which found that ASMR videos light up the parts of the brain involving dopamine and oxytocin, hormones associated with feeling focused, relaxed and comforted.

Whatever the explanation, Mr Laflin is awed by how many people find his work a pleasure to watch.

“I didn’t expect people to enjoy it as much as they do,” he said. “If I had known that, I would have started filming years ago.”