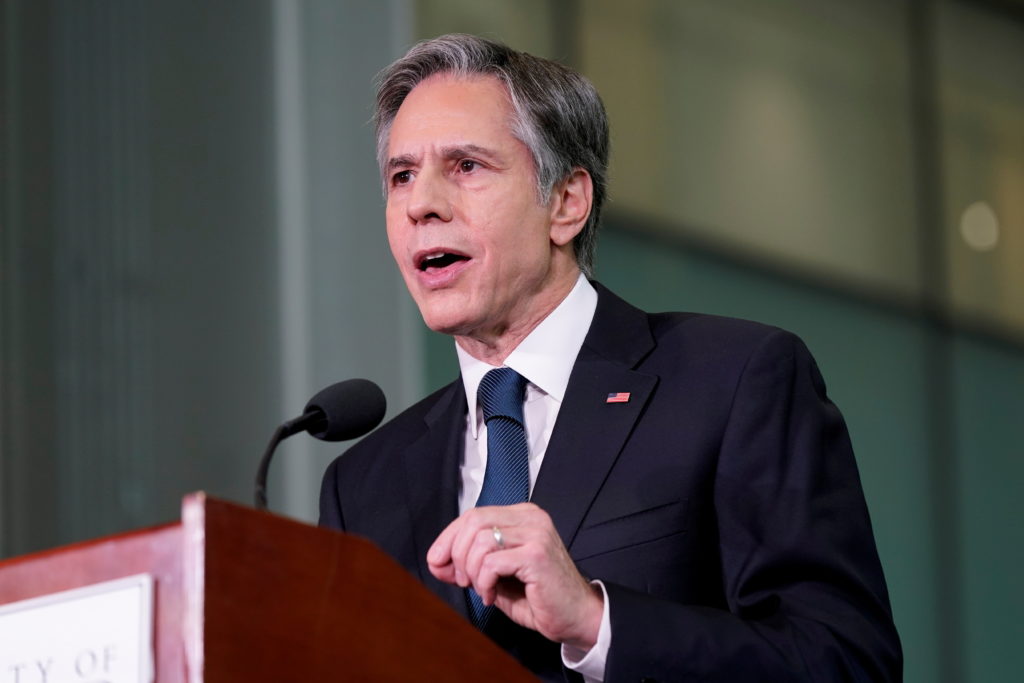 WASHINGTON (AP) — The Biden administration is stepping up pressure on Russia over a buildup of troops along its frontier with Ukraine.

As Secretary of State Antony Blinken prepared to meet his Ukrainian counterpart in Washington on Wednesday, the top U.S. diplomat for Europe said the administration is watching the border situation closely and would regard any escalation with deep concern.

Karen Donfried, assistant secretary of state for Europe and Eurasia, told The Associated Press that senior Russian officials have been warned of potential consequences for any increased threat to Ukraine’s security from what she called “unusual military activity near Ukraine.”

She would not discuss specific consequences for Russia, but administration officials have in the past said boosting military support for Ukraine is one option. Donfried also said the U.S. would continue to warn Russia against using energy exports as a political weapon against Europe generally and Ukraine specifically.

Donfried was part of a U.S. delegation led by CIA Director William Burns that visited Moscow last week and delivered that message personally to Kremlin officials. After leaving Moscow, Donfried traveled to Kyiv to brief Ukrainian officials on the meetings.

“Any time we see unusual Russian military activity near Ukraine we make clear that any escalatory or aggressive action is of great concern to the United States,” she said. “We’re very clear that we support Ukraine’s sovereignty and territorial integrity and that our commitment to that has not changed and is unwavering and that we will continue to stand with Ukraine and we will condemn any Russian aggression against Ukraine in all its forms.”

WATCH: Corruption, cyberattacks and Ukraine among issues Biden promises to challenge Putin on

Speaking of the Moscow meetings, which officials have said included a conversation with Russian President Vladimir Putin and one of his most influential advisers, she said, “Director Burns was effective in sending the messages that he thought it was appropriate to send.”

“The indication of how they processed the information that was shared? The ‘proof will be in the pudding’, as we say,” Donfried said. “We will continue to watch very closely what the Russians are doing on Ukraine’s border.”

A day after Burns and Donfried visited Moscow, Ukraine complained that Russia has kept tens of thousands of troops not far from the countries’ border after war games, as part of an attempt to exert pressure on its ex-Soviet neighbor.

Ukraine’s Defense Ministry said last Wednesday that about 90,000 Russian troops are stationed not far from the border and in rebel-controlled areas in Ukraine’s east. It said specifically that units of the Russian 41st army have remained in Yelnya, about 160 miles (260 kilometers) north of the Ukrainian border.

Russia has cast its weight behind a separatist insurgency in Ukraine’s east that erupted shortly after Moscow’s 2014 annexation of Ukraine’s Crimean Peninsula and has left more than 14,000 people dead. Russia has repeatedly denied any presence of its troops in eastern Ukraine.

Earlier this year, a massive buildup of Russian troops in the Russia’s west raised concern in Ukraine and in the West, fueling fears of an escalation of large-scale hostilities.

Russian officials said the troops were deployed for maneuvers, casting them as part of measures to counter security threats posed by the deployment of NATO forces near Russian borders. Russia and the alliance also have blamed each other for conducting destabilizing military exercises near the borders.

In addition to amplifying U.S. concerns about the Russian troops, Donfried said Washington, along with its European partners, is watching with trepidation to see if Moscow follows through on pledges to meet European demand for natural gas, particularly in the upcoming winter months.

“Russia can and should provide additional supplies through Ukraine, which has sufficient pipeline capacity and they don’t need Nord Stream 2 for that,” she said. “And, if Russia fails to do that, obviously it’s going to hurt European energy security and bring into question what Russia’s motives are for withholding those supplies.”

Fears of Russia’s potential intentions have increased with the imminent completion of a new Russia-to-Germany gas pipeline, known as Nord Stream 2, that is bitterly opposed by Ukraine and Poland, which are bypassed by the route.

Both nations have spoken out about the project vehemently and took sharp exception to the Biden administration’s decision earlier this year to waive sanctions against the pipeline’s main backers.

Donfried said the U.S. is continuing to warn Russia against using energy exports as a political weapon against Europe, something that Moscow has been accused of before, and encouraging it to increase the supplies it sends west.

“While we’re sending that message to Russia, I don’t think anyone is going to relax and feel confident that Russia will, in fact, be increasing those supplies,” she said.