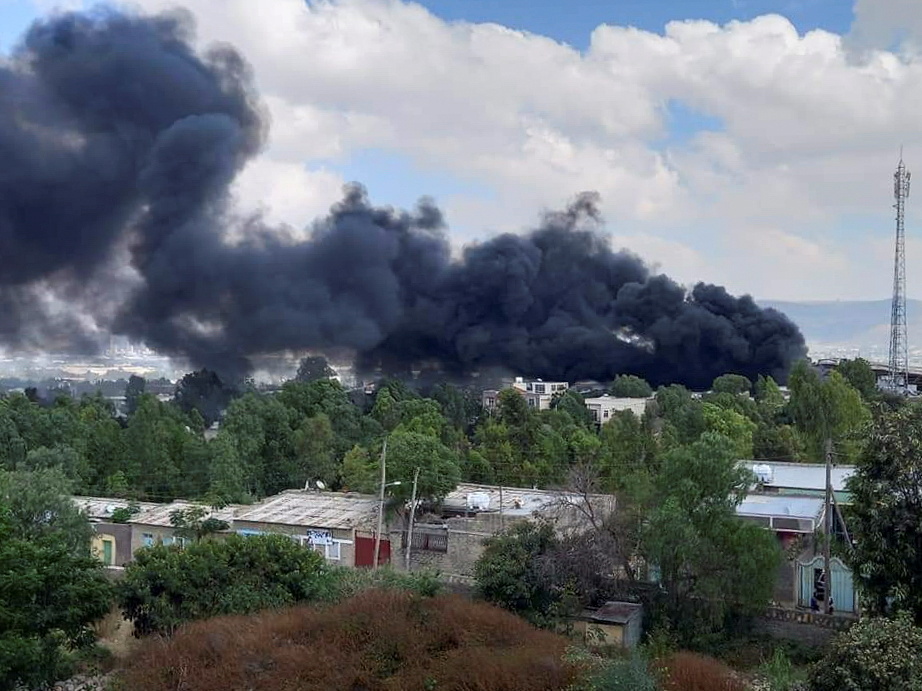 WASHINGTON (AP) — President Joe Biden on Tuesday said he’s decided to cut out Ethiopia from a U.S. trade program, setting the path for further sanctions against the African nation over its failure to end a nearly yearlong war in the Tigray region that has led to “gross violations” of human rights.

Biden in a letter to Congress said Ethiopia has not met eligibility requirements to remain a beneficiary of the African Growth and Opportunity Act. The program provides sub-Saharan African nations duty-free access to the United States on the condition they meet certain requirements, including eliminating barriers to U.S. trade and investment and making progress toward political pluralism.

The president said Ethiopia was in “gross violations of internationally recognized human rights.” Biden also cited Guinea and Mali, which have experienced coups this year, in the letter for being out of compliance.

The sanction goes into effect on Jan. 1. The U.S. trade representative, Katherine Tai, said in a statement her office would “provide each country with clear benchmarks for a pathway toward reinstatement and our administration will work with them to achieve that objective.”

Ethiopia’s government had lobbied openly against the move. “We are extremely disappointed by the threat of AGOA withdrawal currently under consideration by the U.S. government,” the ministry of trade said in a statement, warning that it will “reverse significant economic gains in our country and unfairly impact and harm women and children. Ethiopia will continue to make every effort to correct any unintended or perceived wrongs.”

Biden’s announcement came as the war’s anniversary approaches on Thursday, and as U.S. Horn of Africa envoy Jeffrey Feltman told reporters that the parties to the conflict “don’t seem anywhere near” a cease-fire or talks and called the humanitarian conditions in Tigray “unacceptable.” Thousands have been killed in the war that began in November 2020.

Ethiopia’s government on Tuesday also declared a state of emergency as rival Tigray forces threatened to move on the capital. The United States has warned the Tigray forces, who long dominated the national government before Abiy took office, against any attempt to “besiege” the capital, Addis Ababa, after seizing control in recent days of the strategic cities of Dessie and Kombolcha.

The U.S. and United Nations say Ethiopian authorities have prevented passage of trucks carrying food and other aid into Tigray. Scores of people have starved to death, The Associated Press has reported.

Biden signed an executive order in September threatening to levy sanctions against Ethiopian Prime Minister Abiy Ahmed and other leaders involved in the conflict now spreading into other regions of the country if steps aren’t taken soon to wind down the war.

“Without question, the situation is getting worse and worse, and frankly we are getting alarmed by the situation,” Feltman said, referring not only to the Ethiopian government blockade on Tigray but the Tigray forces’ push into the neighboring Amhara and Afar regions, widening the humanitarian crisis.

Just 13 percent of the needed humanitarian aid has entered Tigray in recent months because of “intentional” government restrictions, some food distribution partners have been forced to suspend their work, and “bodies are already consuming themselves because of famine,” Feltman said. “No government can tolerate an armed insurgency. We get that,” he added, but said no government should “engage in mass starvation against citizens.”

Feltman also warned that the U.S. opposes any attempt by the Tigray forces to “besiege” Ethiopia’s capital after the fighters took control of the strategic cities of Dessie and Kombolcha in the past few days, putting them in a position to move down a major highway toward the capital.

Ethiopia in recent years had one of Africa’s fastest-growing economies, but the war has brought that momentum to a halt.

In a commentary last month in Foreign Policy magazine, Ethiopia’s chief trade negotiator Mamo Mihretu wrote that “Ethiopia’s fledgling manufacturing sector could face an existential threat” and “removal of AGOA eligibility would only worsen the condition of ordinary Ethiopians who have no connection to the Tigray conflict.”

He said that under AGOA in 2000, Ethiopia exported goods worth “a minuscule $28 million to the United States; in 2020, that figure rose roughly tenfold and stood at close to $300 million, nearly half of it under the AGOA.”

He asserted that Ethiopia’s removal from AGOA “would deal a serious blow to the welfare of millions of low-income workers.”

Mesfin Tegenu, chairman of the American-Ethiopian Public Affairs Committee, estimated an immediate impact of some 200,000 jobs lost, most among low-income female workers.

“On behalf of the one million members of the Ethiopian-American community, we call on the administration to think again,” Mesfin said in a statement.

Feltman, the special envoy, said Ethiopian officials at a retreat in Washington in June were warned that Ethiopia’s relations with the U.S. were at a crossroads. That crossroads, he said, “are behind us.”