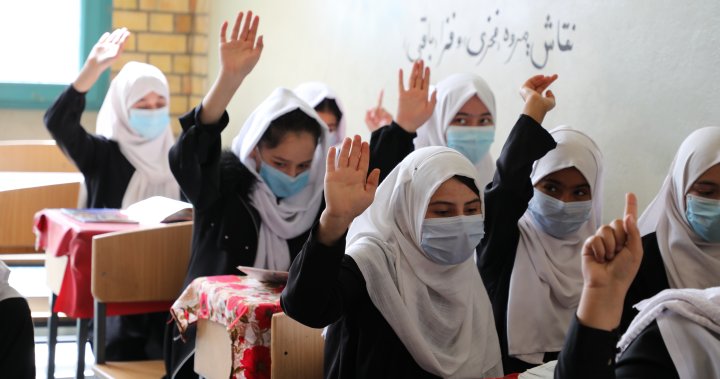 The United Nations children’s agency said it was planning to set up a system to directly fund Afghan teachers, after the international community placed a freeze on funding to the Taliban-led administration.

“UNICEF is setting up a system that will allow direct payments to teachers without the funds being channeled through the de facto authorities,” Jeannette Vogelaar, UNICEF Afghanistan’s chief of education, told Reuters in an email.

In preparation, she said, UNICEF would begin registering all public school teachers.

“The best way to support the education of girls in Afghanistan is to continue supporting their schools and teachers. UNICEF is calling upon donors not to let Afghanistan’s children down,” Vogelaar added.

Read more:
The Taliban is rebranding Kabul with its white flags, but what comes next has Afghans on edge

Afghanistan’s public services, in particular health and education, have been plunged into crisis since the Islamist Taliban movement took over the country on Aug. 15.

Many foreign governments have placed a ban on funding outside of humanitarian aid that is channeled through multilateral agencies.

That has generally been limited to urgent supplies such as wheat and blankets, leaving public service workers including teachers without pay for months. Billions of dollars in Afghan central bank funds held overseas have also been frozen.

The international community has raised alarm that the Taliban might restrict female education, and high schools for girls in many parts of the country have remained closed even while those for boys have been allowed to open.

A Taliban official told Reuters this week there would be “good news” soon on older girls being allowed to go back to school, and that they were working with UNICEF and other international organizations on the issue.

“We are working especially with UNICEF and some other international organizations … to come up with a good solution … we have meetings on a daily basis,” said Waheedullah Hashimi, Director of External Programmes and Aid at Afghanistan’s Ministry of Education.

“We have a problem that economically we are not good … that is why we are requesting the international community, international organizations, especially those who have funds for emergency situations, to help us in this regard,” he added.