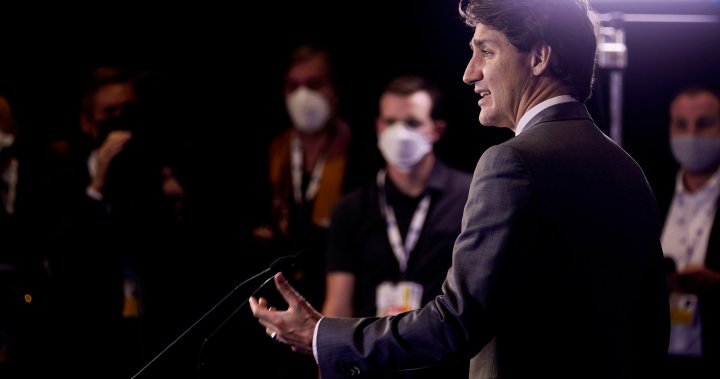 Prime Minister Justin Trudeau said the G20 needs a sense of “urgency” to address the growing threat of climate change Sunday, as the leaders’ summit kicked off its second day with a session on climate action.

“Climate change cannot be denied,” he said on Twitter. “And climate action cannot be delayed. Working together with our partners, we need to tackle this global crisis with urgency and ambition.”

But negotiators working through the night did not appear to have made much headway on securing agreement to phase out coal power more quickly or hastening plans to get to net zero emissions.

Italian Prime Minister and G20 host Mario Draghi made a last-ditch effort to urge the leaders of the world’s biggest economies to accept the reality of the situation.

“We face a simple choice,” he told leaders at the table. “We can act now, or regret it later.”

Repeated attempts for Trudeau and Draghi to have a bilateral meeting in Rome were scuttled by time limitations. Saturday’s planned meeting was cancelled by Italy because Draghi was running too far behind. On Sunday the rescheduled meeting was first on, then off because the morning climate session went long. Another round of rescheduling and cancellation then took place when Trudeau’s scheduled meeting with Argentine President Alberto Fernandez interfered.

Canada did get some positive feedback on its climate policies from German Chancellor Angela Merkel and European Commission President Ursula Von Der Leyen. According to Canadian officials, Merkel told Trudeau it was bold to introduce a carbon price as an oil-producing country.

Von Der Leyen met with Trudeau for a one-on-one discussion Sunday morning at his hotel.

“I want to thank you for being such a strong, dedicated ally in the fight against climate change,” she told him. “I think this is the topic of not only today, but also the century, of maximum importance.”

The United Nations reiterated warnings this week that with the current policies promised by parties to the Paris climate agreement, the Earth will warm more than 2.7 C by the end of this century.

The Paris agreement aimed to keep it below 2 C and as close to 1.5 C as possible. The G20 was debating how to reword that target to make 1.5 C more critical.

“Scientists tell us that under current policies, the consequence of climate change for the environment and the world’s population will be catastrophic,” said Draghi. “The cost of action, however, high it may seem, is trivial compared to the price of inaction.”

The prospect of progress at the two-day summit at the Rome Convention Centre dimmed in the days before the summit when China submitted its new targets to the United Nations with barely any increase in ambition.

China still plans to keep growing emissions until 2030, and isn’t agreeing to move its net zero target up from 2060. It was slightly more specific about using more renewable energy and planting more trees.

Chinese President Xi Jinping was also not at the table, choosing to send his foreign minister Wang Yi instead.

Canadian Deputy Prime Minister Chrystia Freeland said Saturday that Xi’s absence wasn’t ideal, but wouldn’t comment on what impact she thought that may have on the climate talks.

Xi was one of five G20 leaders who didn’t make the trip. The leaders of Russia, Mexico, Brazil and Japan also sent officials and participated themselves only virtually.

But China’s importance to the G20 negotiations on ending coal-fired electricity made Xi’s absence potentially the most troublesome. He is also not attending the COP26 summit, which kicked off in Glasgow, Scotland on Sunday.

The final communique from the two-day gathering remained vague about the deadline for countries to reach net zero carbon emissions or for them to phase out coal power.

But Trudeau says the summit still managed to make “significant progress” by recognizing that countries need to aim to keep global warming to 1.5 C.

He says progress was also made in at least recognizing that phasing out the use of coal and methane is critical to the fight against climate change.

Trudeau says the fact that G20 leaders were able to meet in person for the first time in 18 months to focus on the issue was progress in itself.

He is heading from the G20 to Glasgow for the United Nations climate conference, known as COP26, and Trudeau says Canada will continue to work with like-minded partners to come up with more ambitious goals.