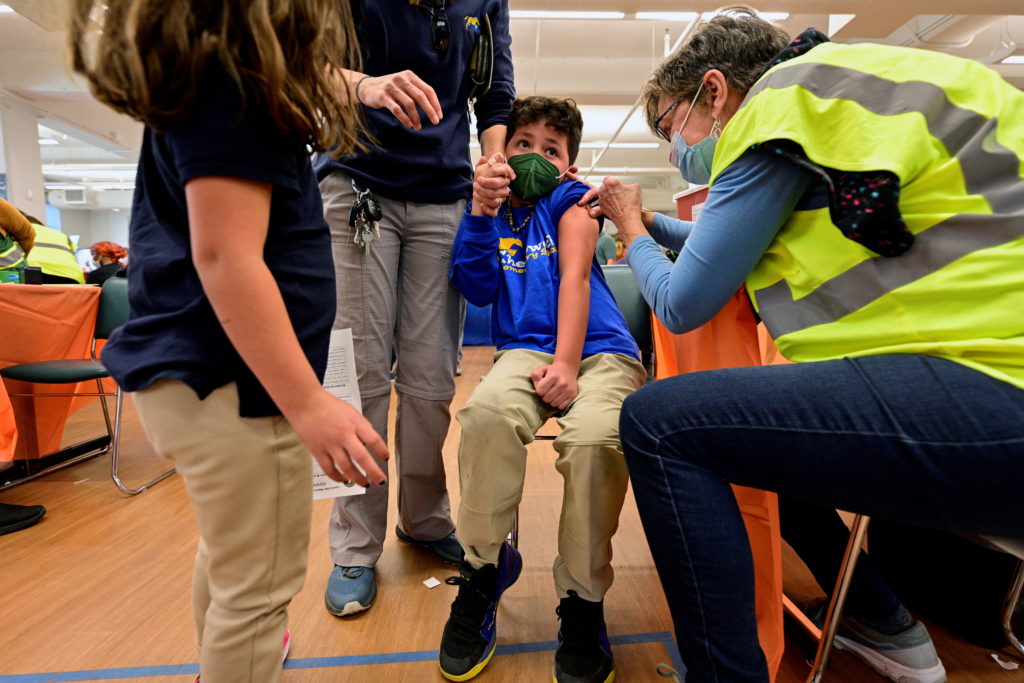 WASHINGTON (AP) — The campaign to vaccinate elementary school age children in the U.S. is off to a strong start, health officials said Wednesday, but experts say there are signs that it will be difficult to sustain the initial momentum.

About 900,000 kids aged 5 to 11 will have received their first dose of the COVID-19 vaccine in their first week of eligibility, the White House said, providing the first glimpse at the pace of the school-aged vaccination campaign.

“We’re off to a very strong start,” said White House COVID-19 coordinator Jeff Zients, during a briefing with reporters.

READ MORE: How doctors are getting COVID shots to kids ages 5-11

Final clearance for the shots was granted by federal regulators on Nov. 2, with the first doses to kids beginning in some locations the following day.

The estimated increase in vaccinations in elementary school age children appears similar to a jump seen in May, when adolescents ages 12 to 15 became eligible for shots.

Now nearly 20,000 pharmacies, clinics and physicians’ offices are administering the doses to younger kids, and the Biden administration estimates that by the end of Wednesday more than 900,000 of the kid doses will have been administered. Additionally about 700,000 first-shot appointments are scheduled for the coming days.

About 28 million 5 to 11 year-olds are now eligible for the low-dose Pfizer vaccine. Kids who get their first of two shots by the end of next week will be fully vaccinated by Christmas.

The administration is encouraging schools to host vaccine clinics on site to make it even easier for kids to get shots. The White House is also asking schools to share information from “trusted messengers” like doctors and public health officials to combat misinformation around the vaccines.

A initial surge in demand for vaccinations was expected from parents who have been waiting for the chance to protect their younger kids, especially before the holidays.

In West Virginia’s Cabell County, high demand for the pediatric vaccines led local health officials to start setting up vaccination clinics in all the county’s public middle schools. A spokeswoman for the county health department said there were some lines for vaccines in the first few days after the doses were approved for kids ages 5 to 11, but that things have slowed since then.

Some experts say that nationally, demand could begin to recede in only a matter of weeks. They note polling data suggests only a fraction of parents have planned to get their kids shots immediately, and they suspect the trend will play out like it did earlier this year when kids ages 12 to 15 were authorized to get shots.

In the first week after vaccines for that age group were authorized in May, the number of adolescents getting a first shot jumped by roughly 900,000, according to an American Academy of Pediatrics review of federal data. The next week, it rose even further, to 1.6 million.

“There was an initial burst,” said Shannon Stokley of the Centers for Disease Control and Prevention.

But then the number dropped steadily for months, interrupted only briefly in early August as the delta variant surged and parents prepared to send children back to school.

Since then, adolescent vaccinations have flagged considerably, to just 32,000 getting their first shots last week. Only about half of adolescents ages 12 to 17 are fully vaccinated, compared to 70% of adults.

Barring school attendance vaccination requirements, it’s unlikely that vaccination rates in young kids will be as high as what’s seen in adults — or even in adolescents, some experts said.

Part of the reason is COVID-19 has been more dangerous to adults, especially older adults, while causing far fewer serious illnesses and deaths in children, they noted.

“Parents may have the perception it may not be as serious in young children or they don’t transmit it,” said Stokley, the acting deputy director of the CDC’s Immunization Services Division.

But more than 2 million COVID cases have been reported in U.S. children ages 5 to 11 since the pandemic started, including 66 deaths over the past year, according to CDC data. “We’re going to have a lot of work to do to communicate to parents about why it’s important to get children vaccinated,” she said.

Zients said the effort to vaccinate younger kids is still ramping up, with new clinics coming on line. Government officials expect the number of children who are vaccinated to keep rising in the days and weeks ahead, he said.

“We are just getting started,” he said.

Earlier this year the White House set — and missed — a July 4 goal to have at least certain percentage of U.S. adults vaccinated. Officials have not announced a similar target for kids.

Dr. Lee Savio Beers, president of the American Academy of Pediatrics, called the new numbers reassuring and said the rollout appears to be going smoothly for the most part. She noted however that with a lower dose and different vials than for older kids, the rollout requires more steps and that some states have been slower in getting vaccine to providers.

Initial data from some areas show Black children lagging behind whites in getting their first doses, which Beers said raises concerns.

“It’s really important to make sure the vaccine is easily accessible in a wide variety of places,’’ Beers said.