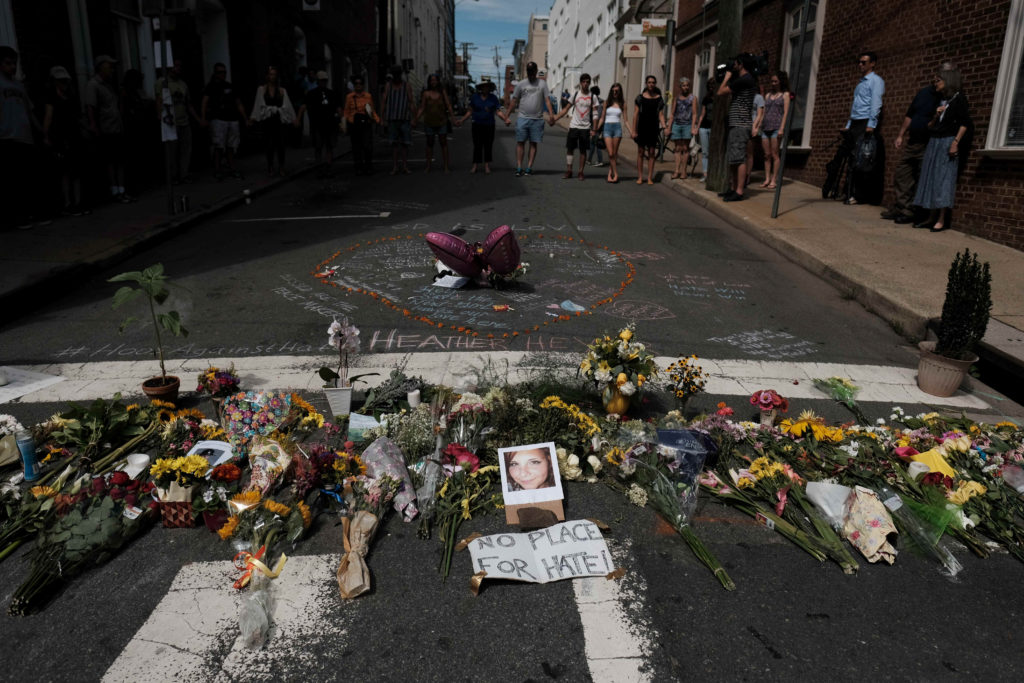 CHARLOTTESVILLE, Va. (AP) — A woman who was pushed out of the way as a car slammed into counterprotesters at a 2017 white nationalist rally in Charlottesville described a scene of “complete terror” as she testified Monday to seeing her fiance bleeding on the sidewalk and later learning a friend was killed.

Marissa Blair took the stand in the third week of a civil trial of a lawsuit that seeks to hold the white national organizers of the “Unite the Right” rally accountable for the violence that erupted. Nine people who were physically injured or emotionally scarred, including Blair, are suing the organizers of the rally, alleging they conspired to commit violence during two days of demonstrations in Charlottesville.

“I was confused. I was scared. I was worried about all the people that were there. It was a complete terror scene. It was blood everywhere. I was terrified,” said Blair, breaking down in tears several times during her testimony.

WATCH: Trial of the white nationalists behind the 2017 Charlottesville rally is set to begin

The driver of the car, James Alex Fields Jr., a self-proclaimed admirer of Adolf Hitler from Maumee, Ohio, is serving life in prison for murder and hate crimes. One woman was killed and dozens were injured in the car attack.

The lawsuit seeks monetary damages from two dozen white supremacists, neo-Nazis and organizations the plaintiffs allege participated in a conspiracy to incite violence.

Hundreds of white nationalists descended on Charlottesville on Aug. 11 and Aug. 12, 2017, ostensibly to protest city plans to remove a statue of Confederate Gen. Robert E. Lee. Clashes between the white nationalists and anti-racism protesters broke out both days, prompting authorities to declare the gathering on Aug. 12 an “unlawful assembly” and to order crowds to disperse. It was after that announcement that Fields rammed his car into a peaceful group of counterprotesters.

The violence shocked the nation, and a political firestorm erupted after then-President Donald Trump failed to strongly denounce the white nationalists, saying there were “very fine people on both sides.”

The lawsuit is being funded by Integrity First for America, a nonprofit organization formed in response to the violence in Charlottesville. Some of the country’s most well-known white nationalists are named as defendants, including: Richard Spencer, who coined the term “alt-right” to described a loosely connected band of white nationalists, neo-Nazis and others; Jason Kessler, the rally’s main organizer; and Christopher Cantwell, a white supremacists who became known as the “crying Nazi” for posting a tearful video when a warrant was issued for his arrest on assault charges for using pepper spray on counterdemonstrators.

The plaintiffs include four people who were hurt in the car attack and others who were victims of violence during a torch rally at the University of Virginia on Aug. 11 or during demonstrations the following day.

The plaintiffs’ lawyers have shown the jury a large collection of chat room exchanges, social media postings and other communications in which the defendants use racial epithets and discuss plans for the demonstrations, including what weapons to bring.

They’re also relying on a 150-year-old law passed after the Civil War to shield freed slaves from violence and protect their civil rights. Commonly known as the Ku Klux Klan Act, the law contains a rarely used provision that allows private citizens to sue other citizens for civil rights violations.

The defendants claim their language in many of their chat room exchanges was hyperbolic and is protected by the First Amendment. They also say their talk of weapons and combat was meant only in the event they had to defend themselves from counterprotesters.

Blair said she received minor physical injuries when her fiance pushed her out of the way as the car sped toward the crowd. But she has suffered from flashbacks, panic attacks and depression from witnessing the attack and from grief over the death of her friend, 32-year-old Heather Heyer.

“My emotional scars were way worse than my physical ones,” Blair said.

Blair and her fiance, Marcus Martin, who received serious injuries when he was struck by Fields’ car, got married nine months after the attack. But Blair said the physical and psychological impacts of the event took a toll on their relationship and they are now divorced.