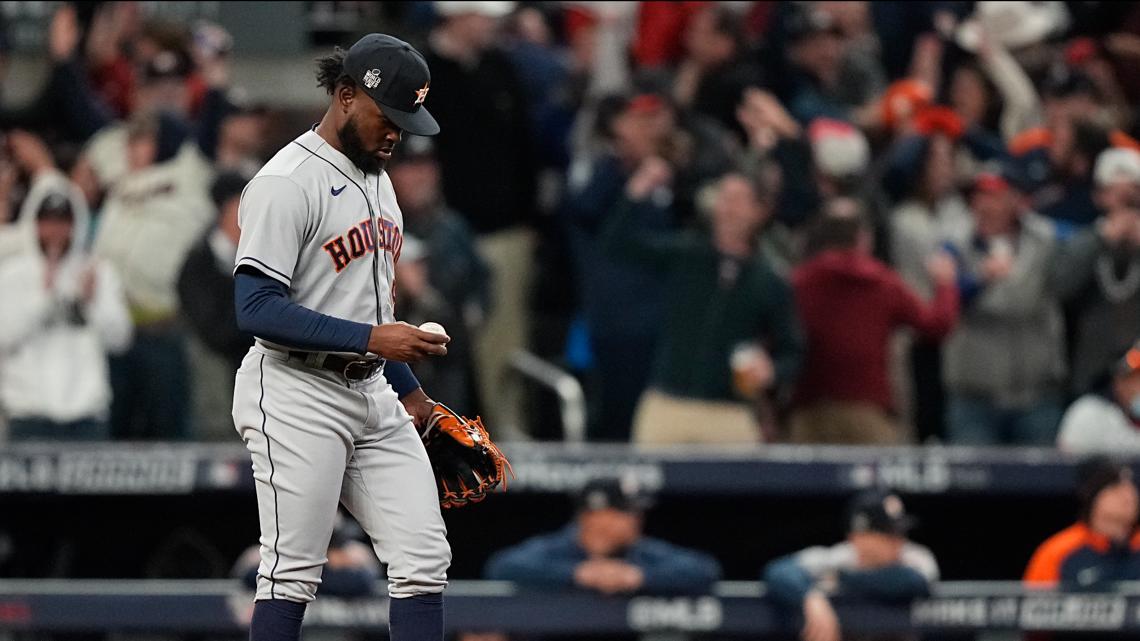 The Atlanta Braves are one win away from a World Series win over the Houston Astros.

ATLANTA — Dansby Swanson and pinch-hitter Jorge Soler hit back-to-back homers in the seventh inning, propelling the Atlanta Braves to a 3-2 victory over the Houston Astros and a three games to one lead in the World Series.

The Braves can wrap up the title on their home field, just as they did two stadiums ago when they beat the Cleveland Indians in 1995.

Swanson’s one-out drive made it 2-all and Soler followed with a liner to left field off reliever Cristian Javier.

The Braves spilled out of the dugout when Soler connected, and the crowd erupted at Truist Park.

The Astros missed a lot of chances to score early, and it came back to cost them. After the game, Astros’ manager Dusty Baker said he may make adjustments in the lineup.

Dusty Baker will think about mixing up the lineup.
He’ll let us know tomorrow

#KHOU11 #Astros manager Dusty Baker says, “We know what we have to do. We have to win tomorrow.” Here’s more initial postgame reaction from Dusty: pic.twitter.com/eBBRfxqxz7

Baker also credited the Braves’ pitching, which has held the Astros mostly in check through two games, only giving up two runs since the series shifted to Atlanta.

In the next at-bat after Dansby Swanson’s homer, Jorge Soler homered to left to give the Braves the lead in the bottom of the seventh inning.

Dansby Swanson homered to right to tie the game in the bottom of the seventh inning.

Austin Riley drove in a run in the bottom of the sixth to cut the Astros’ lead in half.

Greinke was pulled after four innings of shutout work. Ryne Stanek came on in relief and worked a clean fifth inning.

Greinke got the job done tonight.

In the top of the fourth inning, Jose Altuve homered to center to double the Astros’ lead.

Zack Greinke singled in the top of the second inning. It was the first hit by a pitcher in the World Series since 2016.

Jose Altuve opened the game with an infield single in the top of the first inning. Michael Brantley then walked, bringing up Alex Bregman, who struck out swinging. Yordan Alvarez walked, loading the bases and ending Lee’s night. Kyle Wright came on in relief for the Braves. Carlos Correa grounded out, scoring Altuve for the first run of the game.

Welcome to Truist Park where the weather seems to be worse than it was yesterday. (More wind, IMHO) pic.twitter.com/fzHdGFUXJQ

3:01 p.m – The Astros and Braves announced their lineups:

Check out more Astros stories on the KHOU 11 YouTube page: